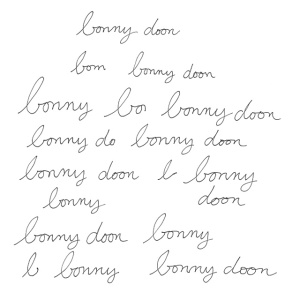 Bonny Doon are a four piece acoustic/lo-fi band from Detroit and all members have been involved in a number of projects in the run up to this album, which makes for quite the interesting listen. The band focus around an acoustic/folk style, however their stints in bands have clearly had an influence as the record delves into some lo-fi and grittier sounds.

The self-titled album kicks off with the slow and lackadaisical ‘Relieved’, and this song really sets up the tone and pace for the album as the band never really stray too far away from this pace. This also runs into the song ‘Summertime Friends’ which is a really catchy number, but the band seem to play it fairly safe.

The album really kicks into life with the track ‘Lost My Way’ which really does inject some life into the entire band. With the under produced sounding guitar along with the compatible vocals, it really does have some lo-fi qualities which the band pull off well. The main feature on this track is the lead singer shouting down the house along with a catchy hook, proving it to be a stand-out song. ‘I See You’ follows this lo-fi pattern while staying true to their acoustic and rustic style, like something you’d hear from Beat Happening.

The second part of the album has much more to offer regarding edginess and rough around the edges. ‘Maine Vision’ is a noteworthy song which harkens back to something The Strokes may have done in their early days. However ‘Evening All Day Long’ gives the album that bag of gold to hold onto. A classic tale of breaking up which is delivered passionately on the acoustic guitar, although it doesn’t have a blistering electric sound behind it, the lyrics and the tale make this song.

Bonny Doon clearly have a direction they want their music to go, unfortunately on the album there weren’t many tracks that left a lasting impression which is a common problem for most bands.  However it was refreshing to hear a band that delivered something different and didn’t recycle garbage which a lot of people are guilty of in this genre.